Disney’s hit animated movie Tangled is now being made into a musical for Disney Cruise Line! 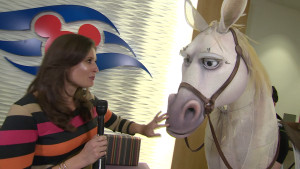 California Life’s Audra Stafford was one of just five journalists in the country invited to their rehearsal facility in Toronto to get a sneak peek at the show and talk to the creative team behind it. Check out her story below!

The musical will feature three new songs from the movie’s legendary composer, Alan Menken, as well as top-notch sets, lighting and puppetry elements to bring the world of Rapunzel, Flynn Rider and Maximus to life on stage.

Tangled: The Musical has been in development for nearly two years. It is set to open aboard the Disney Magic this November. For more information, visit www.disneycruiseline.com.