Next month, Universal Studios Hollywood will celebrate the grand opening of its highly-anticipated new attraction, The Wizarding World of Harry Potter.

And, as if that’s not enough, today the theme park announced another huge addition, coming this summer. 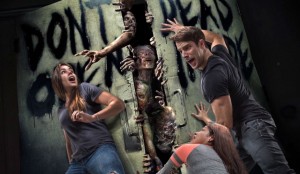 The most popular show in cable television history will come to life when AMC’s Golden Globe award-nominated television series, “The Walking Dead,” sets up permanent residency at Universal Studios Hollywood in an all-new immersive, cutting-edge attraction.

The Walking Dead Attraction will be located within an entirely new, custom built structure, situated within an expansive building complex just inside the theme park’s main entry.

Keep checking back with California Life for updates as both of these exciting new additions to the park get closer to opening!