One of the most dazzling attractions at the California Adventure resort is the Paint the Night parade.

The Incredibles 2 (2018) stars are now a part of the Paint the Night Parade. The stars take off right where the second movie begins! In the parade, the Incredibles family fights the Underminer to keep the city safe. 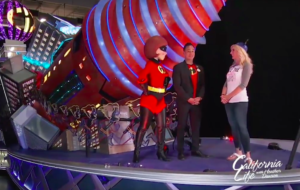 Paint the Night is a brilliant display of light and sound. After a successful run at Disneyland, Paint the Night has moved to California Adventure where Buena Vista street is lit up with this bright parade. It takes more than 1 million lights to illuminate the parade’s costumes and floats.

Paint the Night is all a part of Pixar Fest which goes through September 3.

Representing Toy Story, Slinky Dog takes a walk around the parade with ears that are a whopping 18 feet tall and 11 feet wide. Talk about larger than life! At 32 feet long, Slinky isn’t even the biggest float — Mack Truck from Cars is, zooming in at 54 feet!

In addition to extravagant floats, Paint the Night has 73 performers. Tracy Halas, show director and choreographer, says how much time and dedication it takes to coordinate the dancers and the floats for the bright Disney attraction.

Paint the Night is a place where guests can be dazzled by the songs, dancing and lights. The parade happens nightly at California Adventure.

Learn more about Paint the Night in the latest episode of California Life.