In the new movie “Eighth Grade,” Elsie Fisher captures the anxious-teenager “Kayla” in the hit-indie film all about the last week of eighth grade.

The film, directed by Youtuber Bo Burnham, premiered at Sundance Film Festival earlier this summer. “Eighth Grade” starts conversations about coming-of-age, the use of social media and growing up in today’s society. 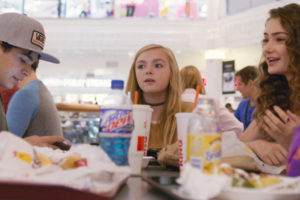 Kayla’s single dad, played by Josh Hamilton, does his best to connect with her, fumbling and bumbling along the way.

Elsie says she hopes by watching “Eighth Grade” kids and parents can have a better understanding of each other. Elsie says wants parents to understand that kids are emotionally mature, they just struggle to articulate their feelings.

Elsie also says we each character in “Eighth Grade” is relatable, and that from this process she learned that other people do feel that way you do.

“Eighth Grade” has a 98 percent score on Rotten Tomatoes. The film portrays the highs and lows of the middle school years with raw honesty.

To see the hit-comedy check out theaters near you and keep watching California Life HD!