The Specialty Equipment Market Association (SEMA) in Las Vegas is the perfect place to watch all-new cars roll into the market. Jason Rzucidlo takes us into the unveiling of the year’s latest models from some of the top brands around the world.

Looking for exclusive luxury? The Ford GT Carbon Series Supercar will be produced in limited quantities. One will be made a week, and the owner application process recently opened on November 8th at FordGT.com, but it has already closed due to an overwhelmingly positive response. 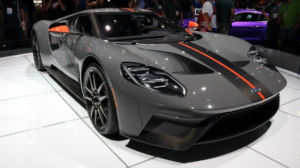 The American Auto-Maker also took the opportunity to show off its iconic Ford Ranger Mid-size Pick-up at the show.

Shell and Pennzoil took visitors back in time to see Steve McQueen‘s famous 1968 Ford Mustang better known as the “Bullitt.” It is the exact car that was driven in the film by the same name, which features an iconic chase scene. The car was built at a Ford plant in California and it was later purchased by Warner Bros. for Bullitt (1968).

The famous car is currently owned by Sean Kiernan who says, “Every scratch on it has meant something to me from the beginning. That’s why I always leave her in this condition.”

For more information about the SEMA show in Las Vegas watch the segment below!