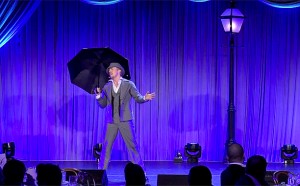 After nearly ten years, and a record six mirror ball trophy wins, Derek Hough is taking time off from Dancing With the Stars to do some dancing on Broadway.

The two-time Emmy winning choreographer will be stepping into Gene Kelly’s shoes in an all-new revival of “Singin’ in the Rain,” which is set to open in January 2017.

As if preparing for a leading role on Broadway isn’t enough, Hough is also promoting his new book Taking the Lead: Lessons from a Life in Motion.

California Life’s Concetta DeLuco spoke with Hough about his book, what keeps him moving forward and his new partnership with Hilton called “Our Stage, Your Story.”

Check out the interview below, airing statewide this week on California Life!