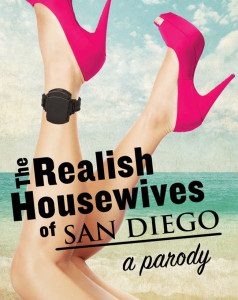 The Realish Housewives of San Diego: A Parody opens tonight at the Balboa Theatre in Downtown San Diego.

The show is from the creative team out of The Second City and “comes complete with all the booze, brawls and botox that have become the standard on reality television.”

Ravonka, the baroness of uncertain ethnicity
Claudia-Louise, pretty and conniving in equal measure
Brooke, the self-made business tycoon
Desiree, the neck model and
Gwen, who is glambitious from head to toe

The Realish Housewives of San Diego is playing through Sunday, February 7th. For show times and ticket information, visit BroadwaySD.com.