by Jason Rzucidlo
“Love the Coopers” is the first holiday movie of the season and boy what a great one it is! It will have you laughing so much that it will make you fall off of your seat. If you’re not in the holiday spirit yet, this will put you in it.

The film opens with a sequence of holiday traditions–snowflakes, Christmas trees and cookies being put into the oven. I particularly enjoyed the way it was shot and edited. Next, there is a shot of a parking lot full of Christmas trees for sale.

“Love the Coopers” features a star-studded cast including Diane Keaton (Charlotte), John Goodman (Sam), Ed Helms (Hank), Amanda Seyfried (Ruby), Alan Arkin (Bucky), Marisa Tomei (Emma), and Olivia Wilde (Eleanor), among many others.
There are several stories going on at once, but it mainly revolves around a large family, known as the Coopers, gathering for Christmas Eve dinner. A series of unexpected visitors and unlikely events turn the night upside down.

Charlotte and Sam were married for 40 years and they had several kids together. Now that all of their children are grown up, their relationship has taken a tumble. The couple planned a trip to Africa, but it never happened.

I liked Olivia Wilde’s character in this movie. She played Eleanor, a single woman, who was looking to find a date for the Christmas Eve dinner so she could impress her parents. Eleanor met a U.S. Army soldier named Joe (Jake Lacy) at the airport. The two hit it off almost immediately. 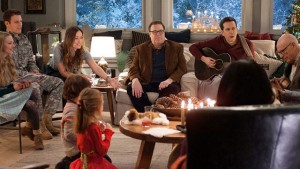 Alan Arkin plays the character of Bucky, who is the father of Charlotte and Emma. He showed up at Ruby’s diner everyday just so he could see her again. I think he was a great father figure because he offered lots of positive advice to the other cast members when they were down in the dumps.

The movie has lots of archive footage of the cast when they were younger. In addition, various black-and-white scenes are shown including one from a Charlie Chaplin film.

Will they all get along for Christmas dinner? That’s a question I’m not going to answer. You’ll have to see the movie to find out for yourself.

“Love the Coopers” is 106 minutes long and comes with a PG-13 rating. It is directed by Jessie Nelson who also did 2007’s “Fred Claus.” Scenes for this movie were shot throughout Pittsburgh, Pennsylvania.

Grab your friends and family and run to your nearest theater to see “Love the Coopers.” It premieres on Friday, Nov. 13 and will be open through Thanksgiving Day and most likely, Christmas as well. It just might end up being a classic.