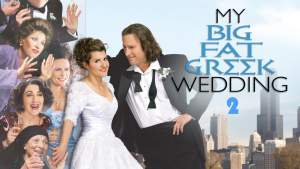 Fourteen years later, Nia Vardalos is back reprising her role of Toula Portokalos in “My Big Fat Greek Wedding 2.” This time around, it also features cameos by John Stamos and Rita Wilson. Tom Hanks returned as one of the producers for the film.
In the opening scene, we see shots of downtown Chicago like the Willis Tower and other buildings. Then, we cut to a shot of the grandfather driving a Cadillac. He picks up the other family members on their way to work and school.
The Portokalos family owns and operates a Greek restaurant. It’s a business that they’ve had for several generations. Their heart and soul is poured into that restaurant on a daily basis.
Toula’s father, Kostas “Gus” (played by Michael Constantine), finds his wedding certificate and notices that it was never signed by the priest 50 years ago. That becomes the main driver for the rest of the movie. His wife, Maria (Lainie Kazan), didn’t immediately agree to getting remarried. She had her doubts.
Meanwhile, Toula and Ian’s daughter Paris Miller (Elena Kampouris) keeps getting pressured to find a Greek boyfriend by her grandfather. She’s in her last year of high school so it’s time to start applying for college. Her family wants her to attend nearby Northwestern University, but she has her heart set on New York University (NYU).
Later on, we find out the wedding planner has quit. The family scrambles to put the wedding together on their own–using friends to help them out at the last minute. 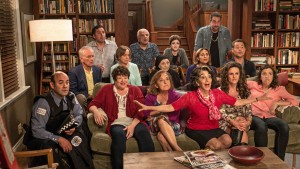 Will the grandparents finally agree to get remarried? Will Paris stay in Chicago for college or move out and go to New York? You’ll have to see the film to find out for yourself.
Filming took place in Chicago and Toronto, Ontario in late 2015. The movie is 94 minutes long and is rated PG-13 for some suggestive material. Kirk Jones directed the second film of the franchise. He’s best known for films such as “What To Expect When You’re Expecting” and “Nanny McPhee.”
The original movie was a surprise hit becoming the most successful comedy film in history. It brought in a total of $368.7 million in worldwide box office sales. I think the second installment will do just the same or exceed the last one.
I really enjoyed the movie a lot. There were lots of jokes that kept me laughing throughout the whole film. It’s a heartwarming story of the bond that keeps a great family together. I hope they’re working on a third one.
OVERALL GRADE: A
Tweet