Last year Arie took the victory at this track, so he says he is hoping to do so again.

Arie said starring on  “The Bachelor” was a great experience, but he is definitely most comfortale behind the wheel. 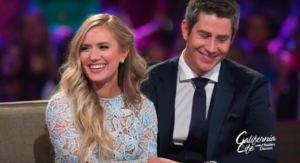 Arie also talks about his relationship with Lauren Burnham. The couple is planing on getting married in Maui on Jan. 12., so the two are going full-force on wedding planning. Nothing will be televised, but Arie says they will post on social media.

When asked if he will be making a surprise appearance on the current season of “The Bachelorette” with his ex-fiance Becca Kufrin, he says viewers will have to watch the show to find out if the rumors are true.

Arie says he wishes Becca a lot of luck on her on journey find love. Arie also also appeared on “The Bachelorette” in 2012 on Emily Maynard’s season.

To find our more about Arie, “Bach nation” or Becca check https://abc.go.com/shows/the-bachelorette out or watch the latest episode of California Life!