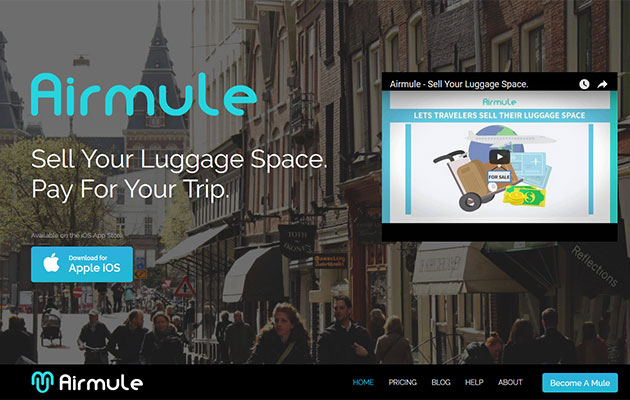 All you have to do is carry someone else’s stuff during your trip.

A new app called Airmule has a compelling premise for travelers who want to jet off without the price tag: free or almost-free international flights, in exchange for one small favor. According to the company, all you have to do is agree to use part of your luggage allowance to transport someone else’s stuff, such as time-sensitive documents and small packages with legal contents.

“We are crowd-sourcing travelers to act as couriers,” says Rory Felton, the company’s founder and chief operating officer. “We are on a mission to enable anyone to travel the world for free.“

The potential discount is significant. International airfares now average around $1250, says Felton, and the fees for couriers who transport shipments can earn between $250 and $500 per one-way flight. This means that some travelers on cheaper routes could have all of their airfare cost covered, while others on pricier flights would still save a sizable amount.

Felton says that the booking platform (which is available at no cost on iTunes and requires iOS 8.0 or later), is similar to the Uber model. Using Airmule, travelers simply list a booked trip and how many bags they intend to check; if there’s a shipper interested in purchasing that space, Airmule will get back to the passenger, usually in less than two days. Like Uber, both the passenger and the shipper will see each others’ information.

Demand for the service is strong, Felton claims, especially in the U.S.-China market. “Current shipping services are too slow,” he says. The company asserts that it can get an item to its destination two to three times faster than a traditional shipper, and with its low overhead, it can also offer shippers rates that are 75 percent less than what Federal Express or UPS charge.

The concept isn’t new. Rather, Airmule’s model is a 21st -century take on the air courier services that were popular in the 1980s and ’90s, whereby travelers who didn’t mind flying very light could double as glorified messengers and fly virtually for free. (Unlike Airmule, most of those earlier courier companies took care of booking the flight.) Most of them faded away after 9/11, however, when the notion of carrying goods for a total stranger fell out of favor.

Airmule could hit some headwinds of its own, judging from the response to a presentation at a recent travel innovation summit in Los Angeles sponsored by the market research firm Phocuswright. Several attendees raised concerns about how a flier would answer if a TSA screener or airline agent asked if they had packed their bags themselves.

Felton responded that “we advise them not to lie,” but he added that Airmule only deals with TSA-approved shipping companies, and that the traveler carrying the item has the right to inspect it. A TSA spokesperson said that the agency wasn’t aware of any concerns with the company, and pointed out that all checked baggage is screened for hazardous materials and explosives.

But airlines could object to a third party effectively selling space in their luggage hold. “That’s our space,” said Bonny Simi, president of JetBlue Technology Ventures. And while an airline might not be aware that a passenger is carrying something for a shipper, if the service catches on, then airlines will likely want to get a piece of the business, she points out.