The famous Doctor Drew Pinksy has appeared on a variety of television programs offering advice to those struggling with addiction. He is a certified specialist who has become a household name due to his status as a media personality who has voiced his professional opinions with celebrities such as Russel Brand or making an appearance on E! News to discuss Demi Lovato’s recent overdose. However, the Pinksy name has a lot more to offer thanks to his talented son Douglas Pinksy who expresses himself through music. 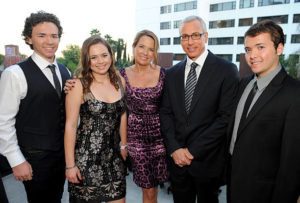 Douglas Pinksy invites California Life HD’s Lisa Spalla into the studio to learn more about the young talent and his inspiration. In Studio City, Pinksy is paving his own way into the spotlight one note at a time. He attributes his passion for music and his unique style to Elton John and Stevie Wonder who have a great piano and vocal duality to their work. He is also a major fan of Josh Groban.

Outside of music, Douglas Pinksy is more well-known for his athleticism as a football and baseball player. He has played all throughout school in Pasadena, and he is sure that many people do not know that he is an avid singer and pianist.

It takes practice and exceptional time management for him to balance all of his responsibilities. However, it is all worth the effort because he finds joy in his music. Check out the segment below for an inside look!