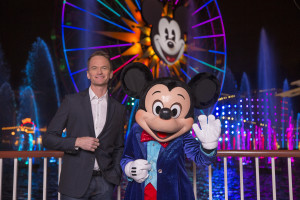 He’s hosted the Oscars, the Tonys and the Emmys. Now, actor Neil Patrick Harris is making a splash at Disney California Adventure, in the all-new nighttime spectacular, World of Color: Celebrate! And this week on California Life, we’re taking you behind-the-scenes.

This new production is part of the Disneyland Resort Diamond Celebration, and according to Executive Producer Sayre Wiseman, it was inspired by Walt Disney’s dream and how it launched what has now become a worldwide entertainment empire.

“We go back to Opening Day, we celebrate Mickey Mouse, which is his first creation, and all of the animated films that were spawned out of his imagination,” Wiseman said.

The show also features some new special effects, and some serious water works. The array is made up of about 1,300 fountains, all of which have multi-colored LED lights.

Our Audra Stafford got a chance to test out one of the water whips and learn more about what it takes to put this show on, night after night. Check out her story below!