Manny Pacquiao, Senator of the Philippines, is also recognized as arguably the best pound for pound fighter in the world.

His fight with Joshua Clottey billed as “The Event” in 2010 was held at the Cowboy’s AT&T Stadium in Arlington, Texas. 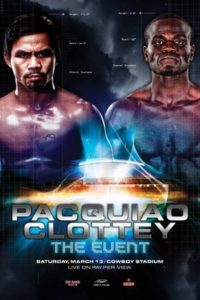 California Life caught up with Pacquiao and his trainer Freddie Roach before the big fight.

Roach explained that he will always predict a knock out, even when Pacquiao cannot. The Filipino fighter was aware his 2½ inch height disadvantage could have caused him some trouble.

The big fight everyone wanted to see was Pacquiao v. Floyd Mayweather. Negotiations fell apart due to drug testing issues. As a result Mayweather was set to fight “Sugar” Shane Mosley instead.

Promotor Bob Arum called Mayweather a coward, stating that even on his best day he could never beat Pacquiao.

Pacquiao prevailed as the winner in “The Event” against his opponent Clottey. After the 2010 match with Mayweather fell through, Pacquiao went into semi-retirement to purse a career in politics.

Boxing fans were left unknowing who would win a Pacquiao v. Mayweather showdown until the two fought in “The Fight of the Century” in 2015. Mayweather won the contest by unanimous decision.

Pacquiao currently serves as a Senator of the Philippines under the United Nationalist Alliance party. His politics couldn’t keep him out of the ring for long, and the legendary boxer continues to fight as a boxing hero as well as a political icon.

For more on the big fight, watch the video below or tune into California Life with Heather Dawson.