NASCAR driver Brad Keselowski is driving circles around his competitors. Keselowski races with humility and lots of DRIVE! His recent three wins surprised the driver because the previous practices did not give him peace of mind, or the belief that it would be a landslide victory. However, Keselowski and his team are proud to win at Darlington, the Brickyard and Las Vegas for three consecutive wins. 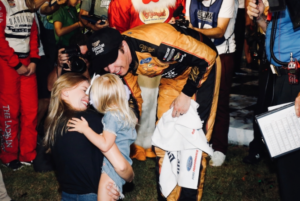 “Going into every race, three things are going to determine how you finish: speed, execution and luck. You can get a little tell on speed before the race starts. You don’t get a tell on luck, and you don’t get much of a tell on execution.” — Brad Keselowski is honest with himself and his team.

California Life HD’s Jason Rzucidlo attended the inaugural South Point 400 where Keselowski scored a major win. In his interview, the winning driver points to the hard work of his pit crew as the most valuable asset of the day. Keselowski considers racing to be a chaotic event that requires a variety of things such as the driver, pit crew and car to be at the top of their game. The sport is a team effort that offers heart pounding adrenaline for drivers and fans alike.

Check out the NASCAR driver’s comments regarding he and his team’s third consecutive win, and watch him drive into victory in the segment below!