For the first time in the show’s history of 34 years, a female has been cast as the leading role at Medieval Times in Buena Park.

The city of Buena Park has hosted MidEvil Times since June of 1986. However, the show has gone through numerous transformations over the years. The new queen, Alexa Moffo, said she plans to inspire a new generation of attendees. 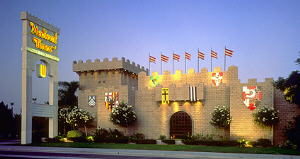 “Just knowing that I am going to be a very string presence for girls, boys — everybody in general — it’s very amazing and a wonderful feeling,” Moffo said.

Casting a woman as the lead inspires a new generation and engages a larger, female audience. 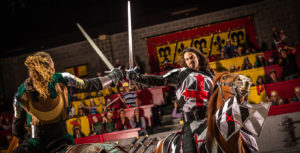 Medieval Times changes their show about every 4 — 5 years. Leigh Cordner, the show director, comes up with these fresh ideas to keep Buena Park guests engaged and returning. Cordoner said recently more jousting and sword-fighting has been added to the show’s repertoire .

Timothy Baker, director of stunts and choreography, said the Southern California location is unique. Though there are eight Medieval Times locations, the Buena Park crowd is especially lively.

The Medieval Times show is a fun way to interact and engage with history. More information can be found on the website.