As the National Park Service recently celebrates its 100th Anniversary, it’s a reminder the parks might not be what they are today without the help of the military.

Sequoia National Park volunteer Jenny Kirk explained to California Life’s Sehr Taneja that before the National Park service was established, troops use to watch over the land.

Now veterans are going back to the forest, but this time to help save their marriages.

“About two years ago, we came across a statistic that 80 percent of the veterans coming back from Iraq and Afghanistan has marriages that would in divorce, ” Mark Landon of the Nature Corps said. “And we thought you know, they are sacrificing so much. To come back home and deal with that kind of conflict, we thought what could we to do help out?”

The Nature Corp began a free veteran’s marriage retreat. During the 3-day getaway, couples get to tour the beautiful lands with ancient trees, swim in lakes, hike glaciers and even explore caves! 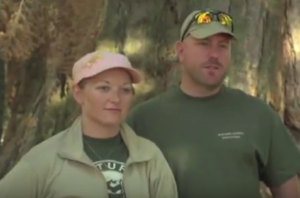 However, more importantly, they get to nurture their relationship and the forest by planting new Sequoias, as part of a conservation effort.

“I love the image of planting a seed and watching something grow,” said Shannon Barg, who is participating in the program. “We’ve been married for than a decade. I feel like you can keep nurturing things and learning new things. Planting seeds in your marriage and growing.”

The program proves that while soldiers battle overseas, sometimes the most important thing to fight for is love!

See what all the couples had to say about their experience at the breath-taking Sequoia National Park and the Nature Corps’ marriage retreat below. Or watch this week’s episode of California Life airing nationwide.