Francis Ford Coppola and his films are famous worldwide and have been for decades. But filmmaking is not his only passion.

Coppola has been in the winemaking business for over 30 years and in 2006 opened a second winery in Sonoma County. He named it the Francis Ford Coppola Winery.

Director of winemaking and general manager at the winery, Corey Beck, explains the story behind one of the brands most popular wines, the Sofia.

In 1998, Coppola went to his winemaking team and asked them to create a special wine for his daughter’s wedding. Sofia Coppola is a screenwriter, producer and actress and has won many awards for her work. In her honor, the winemakers created a prosecco style blend. Coppola and his team designed ornate packaging to compliment the wine’s light taste. 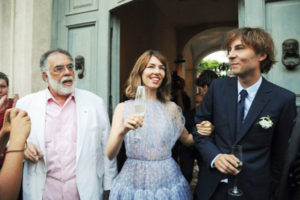 Coppola also has a wine named after his wife and the mother of his children, Eleanor. He has stressed that family is very important to him.

Coppola has also been able to combine his loves of wine and film. Director’s Great Movies, Director’s Cut and Storytellers are just a few of the wine collections that the Francis Ford Coppola winery has to offer.

In these collections are wines inspired by directors and movies that Coppola holds in greatest admiration. Every bottle of Director’s Cut celebrates the history of filmmaking with its wraparound label designed after a Zoetrope strip, one of the earliest moving picture devices.

The winery itself is a place where visitors can enjoy tastings, events, dining experiences, cabins, pools and a movie  gallery.

Even if you cannot make it to the vineyard, Coppola’s wines are available to purchase in a variety of stores or online at www.francisfordcoppolawinery.com. Watch the video below for the full interview.