In recent years, the real estate market has been up and down. One of San Francisco’s top realtors explains how he’s helped his clients turn profit on their real estate investments.

Born in Cameroon, Africa, Paul LeJoy came from a poor family. Through many obstacles, LeJoy discovered his own path to success through real estate. Arriving in the United States in 2001, LeJoy wasted no time chasing and eventually achieving the American Dream. Soon, he was teaching others how to do the same.

LeJoy says he started the company because he loves to share with others. He named the company “Pacific Realty Partners” so that everybody is a partner. Whether you’re an agent or you’re an investor, LeJoy wants to show people how to utilize the tools he has learned so well. More millionaires are created in America using real estate than in any other field, and LeJoy says that is why he is so passionate about what he is doing.

LeJoy is the author of the book “It’s Impossible to be Poor in America“. It explains the principles he used to pull himself from poverty to wealth. A major player LeJoy attributes to his success is his presence in the Bay Area where technology like Yahoo, Google, Apple and Facebook rule the land. 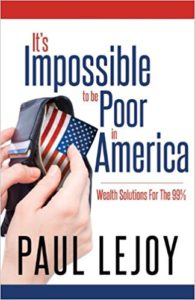 LeJoy emphasizes that those companies are driving the industry. They have influence around the country and around the world, and with them stemming from the Bay Area that is how LeJoy chose to invest there.

While initially working as a project manager, LeJoy bought his first property for $280,000. Just three years later he sold it for $400,000. He realized he was on to something.

LeJoy then earned a real estate license and officially sold his first piece of real estate for nearly 1 million dollars to a colleague, who then used LeJoy to sell property to another colleague. The seeds for Pacific Realty Partners were sown.

LeJoy’s company is now worth an estimated 60 million dollars, but this path to success didn’t come without some bruises along the way. His hard work and determination helped him to create his own American Dream.

For more on LeJoy and the Pacific Realty Partners visit their website or watch the full episode below.