If the name Krug doesn’t roll off your tongue, “Mondavi” might be a little easier to swallow as it is arguably the most notable name in the wine world. Proprietor Peter Mondavi Jr. bears the name behind the bottle.

Robert Mondavi split off and started his winery and his brother, Peter Mondavi Sr., maintains ownership of Charles Krug on his half of the family.

Peter Mondavi Jr. talks about what it means to be born into a brand with such worldwide recognition. He says although his circle is smaller than that of the Hollywood elite, his celeb status within the wine world can be viewed as equivalent.

In wine country, the Mondavi name could run circles around Hollywood’s A-List elite given their historical significance and innovations in the industry.

Peter Mondavi Sr. revolutionized the wine world and at 95 he has no plans to retire. He spends almost every day at the winery, as he lives on the property. Wine is his love and his passion, so he has no interest in retiring for another hobby. 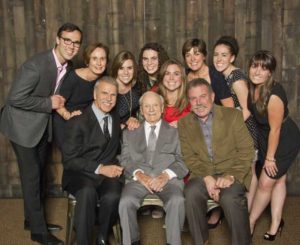 Peter Mondavi Jr. says that the big thing on winemaking in Napa Valley is understanding that it is half science and half art. He says the art part is what differentiates them from other wineries and other areas, and that you have to go with your heart when it comes to making wine.

With their hearts on their sleeves and a 150 year history on the horizon, the Mondavi’s have managed to keep it in the family for three generations.

Now, 45 years after the rift that rocked the wine world both the Peter and Robert Mondavi sides of the family have blended together for a one of a kind wine.

The unique wine is a gathering of the extended Mondavi family, and the cousins have come together to blend a single barrel.

The next time your are in Napa don’t forget to visit the the valley’s oldest winery. Their history will get you in the door and their hospitality will keep you coming back for more.

For more on the Charles Krug Winery visit their website or watch the video below.